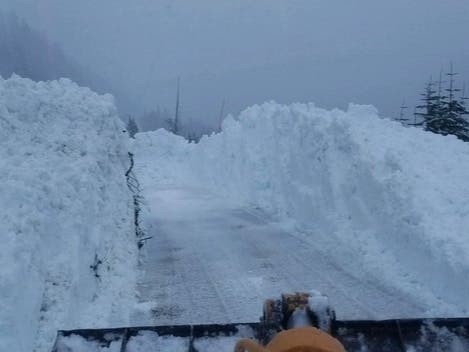 WASHINGTON — On Thursday, as heavy snows assailed the Cascades, the Washington State Department of Transportation made the call to close Snoqualmie, Stevens, White and Blewett passes to drivers. Friday, as the weather died down and crews began their arduous work clearing literal feet of snow from the roadways, WSDOT announced that all four passes would be reopening to traffic sometime Sunday.

Unfortunately, that timeline is looking less and less likely.

In an update Saturday, the Department of Transportation confirmed that plows had made solid progress at Snoqualmie and Blewett passes, and that they would likely be reopening sometime Sunday as scheduled. However, White Pass and Stevens Pass have proved more difficult to clear than previously expected, and will likely remain closed through the weekend.

Plows, blowers and graders are reportedly making steady headway at Snoqualmie Pass, clearing snow and stabilizing the hillsides. Basins have also been dug to make space for melting snow and future rain, WSDOT said. At Blewett Pass, crews have successfully performed avalanche control and are making good time with blowers and plows to clear the highway. WSDOT says both passes will open Sunday. Though the agency is not sure exactly when either pass will open, it says it should know by early Sunday.

Stevens Pass is proving more difficult. According to WSDOT, several snow slides in the area have resulted in snow pileups on the highway— some up to 35 feet tall. Plows have managed to clear one lane of the pass, which crews are using for avalanche control and clearing work. Depending on conditions, they may need to call in a helicopter Monday for assistance, but either way, WSDOT says it is unlikely either Stevens Pass or Tumwater Canyon will reopen before Tuesday.

White Pass, meanwhile, has been delayed by a different problem: while avalanche concerns at the pass are minimal, debris like trees and rocks have washed out of the hills and onto the roadway, forcing WSDOT to call in extra crews to clear the pass. Excavators are on scene and working to remove that debris, but the pass is likely to remain closed until Monday at the earliest.

Travelers can find the latest information on pass closures and conditions on WSDOT’s website and social media channels and follow the latest updates on WSDOT’s blog. Drivers can also find a live map of traffic issues across the region online.