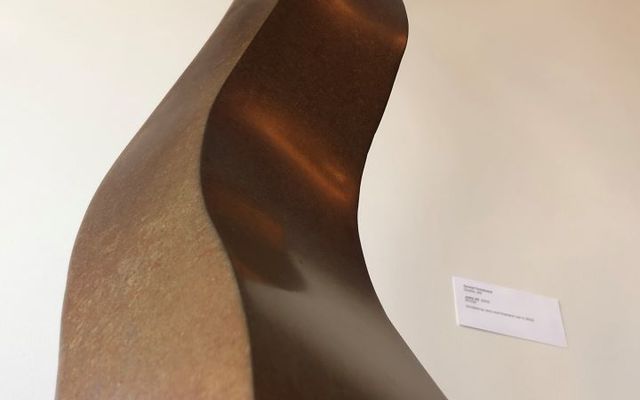 The City of Bellevue is honored to receive an artwork donation from Northwest philanthropists Jerry and Charlene Lee. The donation is a prominent art piece by renowned artist Gerard Tsutakawa and is now on display at City Hall.

The Lees have a long history of community giving and were awarded as 2015 Outstanding Philanthropists by the Association of Fundraising Professionals Advancement, Northwest Washington. It is their hope this donation will inspire others to donate major artworks for the residents of our city to enjoy.

The bronze artwork, titled “Josho #5”, was created in 2003 and stands nearly eight feet tall. Tsutakawa is a Northwest artist with works displayed internationally, but he might be best known locally for his iconic 1999 “Mitt” sculpture at the Seattle Mariners’ stadium.

An artist statement about Tsutakawa’s work reads, “Gerard Tsutakawa’s sculpture designs reflect a confluence of the cultures and traditions of the Pacific Rim. Being raised in a Japanese heritage along with the esthetics of other cultures around the Pacific Ocean has inspired his design sensibility. Growing up in the beautiful Pacific Northwest’s natural environment has helped develop a rich humanistic style to his creative process.”

The Josho sculpture has had several key placements adding to its history, story and prominence. On loan from the artist several years after its creation, the artwork was on display in Washington D.C. at the office of then-Secretary of Commerce (and former governor of Washington) Gary Locke as part of a display of Northwest artists. It then traveled to Beijing when Locke was ambassador to China and was sited at his residence there. Upon Locke’s return to the United States, Jerry Lee bought the artwork from Tsutakawa, and it has been part of the collection at the MG2 corporate headquarters in Seattle since.

Now on display on the first floor of City Hall, “Josho #5” will eventually be permanently installed along the Grand Connection.

The City of Bellevue would like to extend sincere thanks to Jerry and Charlene Lee for their gift to the people of our city, which will be enjoyed for generations.

About the Bellevue Arts Program

The City of Bellevue seeks to be a vital platform for cultural exchange and creative inspiration, turning to living artists to enrich the collective experience of Bellevue’s public places through permanent commissions and a growing collection of moveable artworks funded through the Public Art Program.

A segment of the collection is devoted to artworks that raise the discourse on the defining aspects of Bellevue’s civic life, exploring the diverse identities of our residents, converging cultures, international connections, technological currents and interplay between nature and the urban experience that make Bellevue’s environment unique.

Bellevue’s art collection helps document the dynamic moments and complexities of Bellevue’s cultural life and is an important resource for future generations. More information is at BellevueWA.gov/arts.