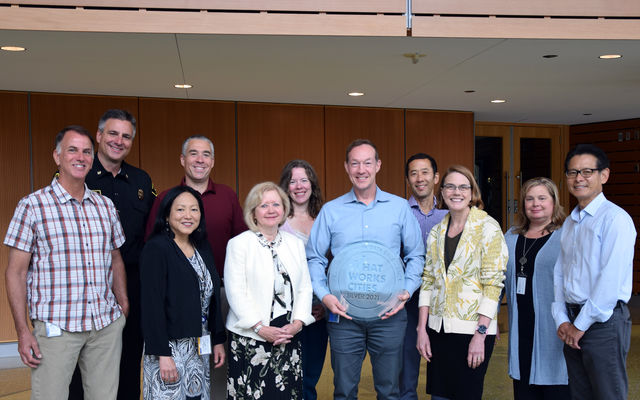 Bellevue has been recognized with the 2021 What Works Cities certification, the national standard of excellence in data-driven city governance. Bellevue joins a select group of cities that have demonstrated how their leaders incorporate data and evidence when making decisions.

Two years after making the What Works Cities honor roll, Bellevue has been certified at the silver level, one of only 16 cities to be newly certified this year. Only 40 cities have been recognized since the program was launched in 2017. What Works Cities is a national initiative launched by Bloomberg Philanthropies to help cities use data and evidence more effectively to tackle their most pressing challenges.

“Bellevue residents expect that as a city government within one of the largest tech regions in the country, we will consistently use data to track, analyze and improve services and amenities in our community,” said Mayor Lynne Robinson. “The What Works Cities Certification is a testament to the efforts we have made in Bellevue toward offering exceptional customer service by using all the technological tools at our disposal to make informed decisions.”

For certification, Bloomberg assesses how often cities use data in their decision-making processes. Do they use data to set goals and track progress, allocate funding, evaluate the effectiveness of programs or achieve desired outcomes from contracts with outside vendors? The program also measures whether cities are publicly and transparently communicating about their use of data and evidence.

Highlights that led to Bellevue’s award included the city’s Vision Zero work to eliminate serious-injury and fatal traffic crashes. The program uses video analytics and crash data to assess the most dangerous stretches of road and address them with safety measures. The city has also established target metrics for its Environmental Stewardship initiative and has a publicly available dashboard to track progress.

To improve transparency with the data collected, the city has an open data portal that is available to the public, and the city just recently launched a set of State of Our Neighborhoods maps, which show key trends in the city’s neighborhoods over the last decade. In a narrative — “Bellevue reaches for big, bold goals” — Bloomberg details data practices that earned Bellevue certification.

In addition, the city has used data to adjust city services during COVID-19 to best meet the needs of residents during the pandemic. This included human services data, traffic data to initiate a Healthy Streets pilot program to encourage walking and biking, and economic data to understand the business impact and design business support programs.

“City leaders are using data to understand and support the needs of residents like never before,” said Michele Jolin, CEO and co-founder of Results for America, the lead partner in the What Works Cities initiative. “Throughout the COVID crisis and a historic reckoning with racial injustice, mayors have relied on data to identify and narrow racial gaps, and to make smarter investments that increase opportunity for all their residents. These cities are testing new solutions and measuring what works, rebuilding trust in government by engaging with their residents, and using evidence and data to drive faster progress on their toughest challenges.”