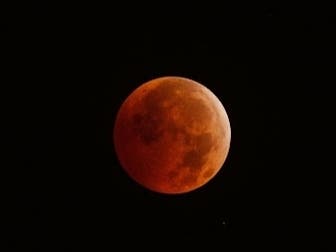 SEATTLE — Mark Thursday and Friday, Nov. 18-19, on your calendar. You may want to plan a lunar eclipse party in Washington and watch the full frost moon turn red. It’s an overnight party, so get your paid time-off requests in — you may not want to drag your tired self to work.

It’s a partial eclipse visible here and throughout North America. It’s going to be an impressive event, lasting 3 hours, 28 minutes and 23 seconds. That will make it the longest lunar eclipse of the 21st century, according to NASA.

And in practical terms, it’s almost a total eclipse.

Usually, light from the sun paints the face of the moon a grayish-white. But when the eclipse peaks around 1 a.m. Pacific Time on the 19th, our planet will block 98 percent of the sun’s light from reaching the moon’s surface, washing it in a reddish hue.

Related: 2021 Guide To Meteor Showers And Other Celestial Events

A total or nearly total lunar eclipse often is called a “blood moon” for this reason. The November full moon, with or without an eclipse, is also called the full frost moon, sometimes called a full beaver or dark moon. All were terms used by Native American tribes, who gave distinctive names to the moons to mark the season. The frost moon is the last full moon of autumn.

You don’t need any special equipment to see it. All you need to do is walk outside and look up.

If it’s cloudy (and there’s a big chance of that, given how Washington falls are) or inconvenient to stay up and watch the eclipse, you can watch a livestream of the lunar eclipse.

This month’s eclipse will be visible throughout most of North America, as well as eastern Russia, Japan, the Pacific Ocean, Mexico, Central America and parts of western South America.