We recently interviewed Jason Foss of the NWG Team I COMPASS to learn about Downtown Bellevue’s latest trend in the real estate market. We were specifically interested in how rising interest rates have affected the market, pricing, and the status of current projects in Bellevue. Foss is a recognized expert in urban properties.

With interest rates rising rapidly during the second quarter, we started to see a shift in activity with sales dropping by about half when compared to the same quarter in 2021. We have not yet seen the slowdown in sales show up in pricing, however, with average pricing for closed sales during the second quarter at $997/sf, up about 12% year on year.

Have homes been sitting on the market longer? Is this shifting to a buyers market? Do you predict that pricing will drop?

Properties have not been selling as quickly as earlier during the first quarter. Although longer market times have not yet been reflected in the days on market statistics for closed sales (which are a lagging indicator), available condo inventory expressed in months (reflecting how long it would take to sell all properties on the market at the current pace of sales) has increased by around 50% to 1.2 months.

Although this is still a low level of inventory by historical standards, buyers do have more options, and are not experiencing the same fear of missing out, compared to earlier in the year. This means far fewer multiple offers, less (or no) escalation with negotiability on price (at least after some period on market), and a greater ability to negotiate non-price terms such as inspection or financing contingencies.

Looked at on a quarterly basis, pricing actually remains higher than it was both in the first quarter as well as at this same time last year. Given that downtown Bellevue is a relatively small submarket, averaging fewer than 20 sales per month, a handful of sales which are outliers on price (high or low) can be enough to influence the average price statistics in any given month.

In this regard, if we instead use an approach comparing the sale of very similar condos last year, earlier in the spring, and now, it is clear that pricing has already fallen from the peak at the start of the year, but is still at or above where it was late last year. Some further softening in pricing is certainly possible through the second half of the year, due in part to seasonal trends, but each property is unique.

The properties with various challenges (on a noisy street, dated interiors, in a less desirable building, etc.) will be impacted disproportionately on price, while the most desirable properties (in terms of characteristics like views, condition, outdoor space, and so on) will continue to be sought after, and will be much less impacted by softer demand. 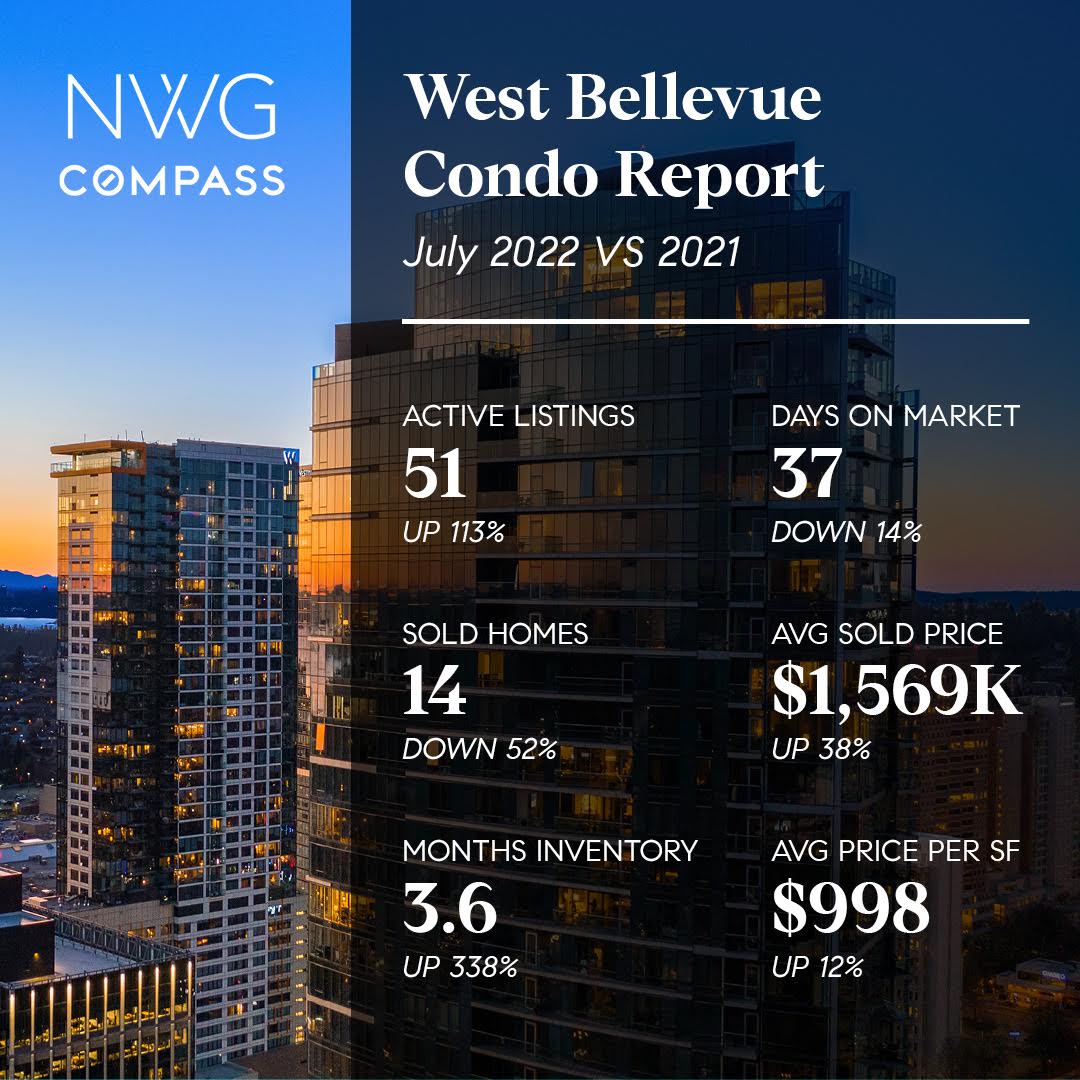 A developer in Seattle recently paused construction on a major project. Do you foresee any projects stopping or not starting in Bellevue?

We have not seen any for sale residential projects in Bellevue paused (at least not publicly), although Amazon has put a hold on the build out of some of its office projects while it takes time to better understand how to optimize office space for post-pandemic work (not to mention probably reduce some capital outlays during an uncertain economic environment).

The reality is that there are only a handful of condo projects in the pipeline at this stage and only Residences at GIS Plaza, a boutique project comprised of just 16 units, will be completed this year. Otherwise, any projects currently under way or getting started now won’t deliver for 2-3 years at which point the economic environment may be very different.