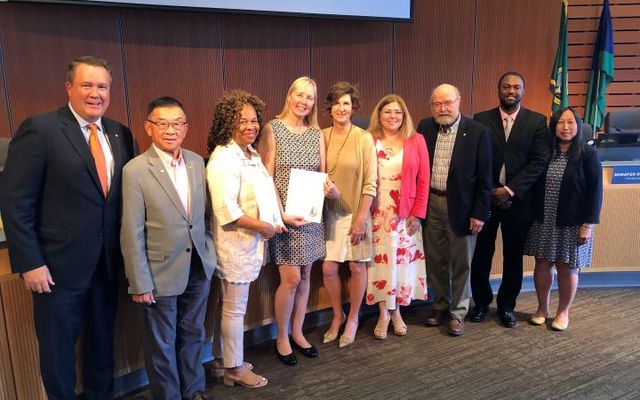 Plus, parks levy to be on November ballot and ADA, Muslim heritage celebrated

On Monday, the council adopted an ordinance amending the city’s Land Use Code to establish regulations for permanent supportive housing, transitional housing, emergency housing and emergency shelter. The ordinance replaces an Interim Official Control (IOC) that was adopted to respond to changes in state law requiring cities to allow permanent supportive housing and transitional housing in all land use districts where residential or hotel/motel uses are allowed, and emergency housing and emergency shelter in all land use districts where hotels and motels are allowed.

The full discussion and votes are available on video replay through Bellevue Television. More information on the process can be found on the Supportive and Emergency Housing Code Amendment web page.

Parks levy to be on November ballot

Further details about the proposition are available on an informational web page on the city’s website.

The council also approved members for pro/con committees who will write statements that appear in the voter’s guide in favor of and in opposition to the ballot measure, alongside the explanatory statement prepared by the city attorney’s office. Eleven community members volunteered for the work, with one person applying to represent the con committee and ten people applying to be on the pro committee. Each committee is limited to three people who may consult with additional people in preparing their statements. The council appointed Sherry Grindeland, Kevin Wallace and Jivana Aras for the pro committee and David Plummer for the con committee.

The full council discussion is available through Bellevue Television’s video replay and more details on the final ordinance are in the meeting materials.

To start the meeting, councilmembers read proclamations recognizing the 32nd anniversary of the Americans with Disabilities Act (ADA) on July 26 and Muslim American Heritage Month during July.