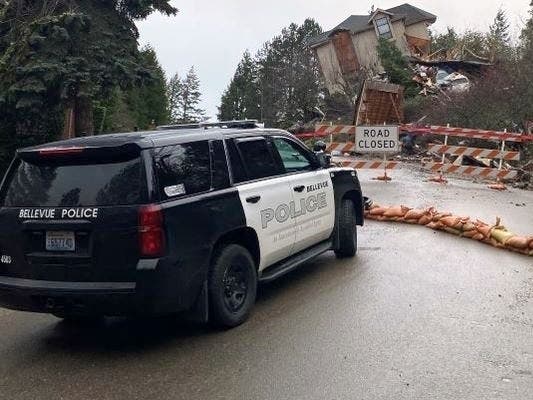 BELLEVUE, WA — Bellevue police officers will maintain a presence in the city’s Somerset neighborhood after a reported burglary attempt at one of the homes evacuated by a landslide and flooding after a water main break early Monday morning.

In a news release Thursday, the city said off-duty officers would provide around-the-clock security near the seven homes that remained evacuated after a resident said a man broke into the back door of a red-tagged home.

“This is a terrible incident and just adds to the stress of the situation for the affected homeowners,” said Brad Miyake, Bellevue City Manager. “As we work through this complex situation, getting neighbors back to their homes safely remains a top priority.”

Earlier in the week, the city confirmed seven families would not be able to return home until more work could be completed to assess the damage and ensure everyone’s safety. On Thursday, the city confirmed the home that slid off its foundation and partially collapsed would need to be demolished before that could happen.

A full investigation of what caused the initial water main break and resulting landslide is expected to take several weeks or months.