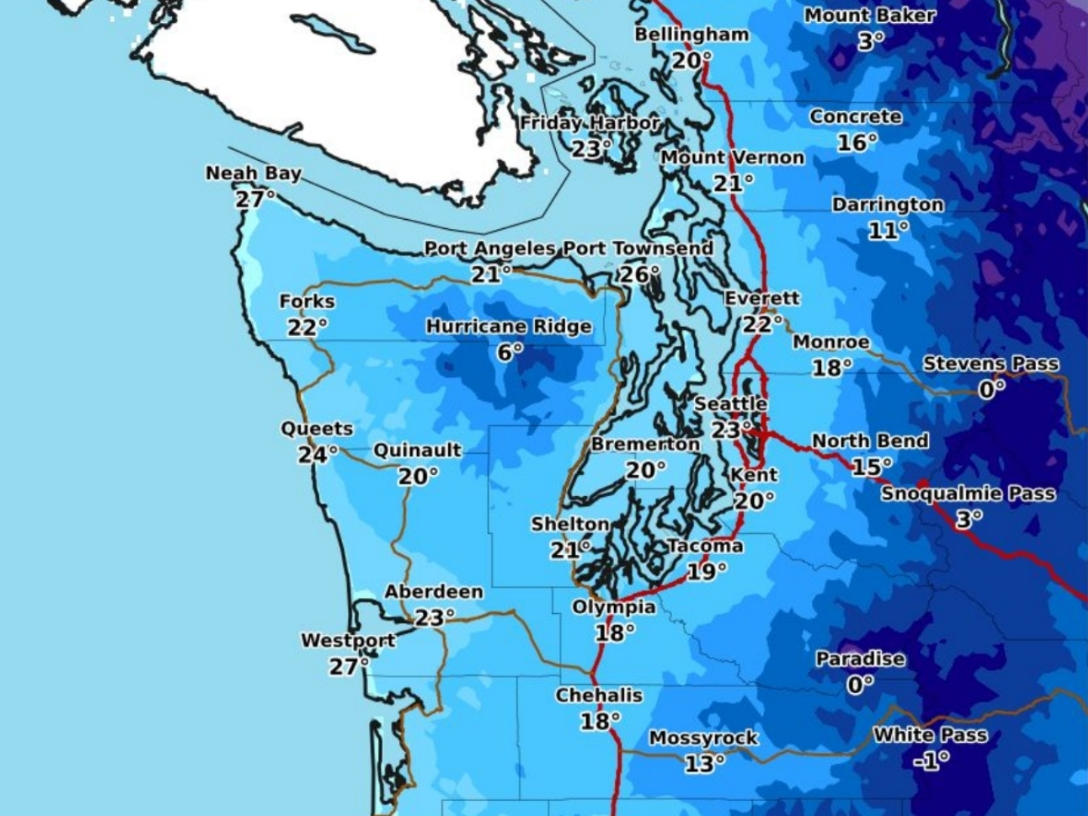 SEATTLE — A winter chill has returned to Western Washington for the last week of February, and the next few mornings could be cold enough to break a few records. While sunshine should be bountiful for most of the week, Tuesday afternoon may even fail to break the freezing mark. Wednesday morning is poised to see temperatures in the low 20s to high teens around Seattle and Tacoma.

“Overnight lows [Monday night] and Tuesday morning will be in the low 20s,” wrote Maddie Kristell, a meteorologist with NWS Seattle. “Not only are daily low temperature records in jeopardy, but coupled with strong Fraser outflow, wind chill values may be in the low teens. This type of cold can be dangerous and proper precautions should be taken to protect vulnerable populations, sensitive plants, pipes and pets.”

Wednesday morning is forecast to be the coldest in the bunch, with lows around 23 degrees in Seattle, 19 degrees in Tacoma, 15 degrees in North Bend, and as low as 3 degrees over Snoqualmie Pass. The colder trend will improve slightly for the back half of the week, but morning temperatures are likely to remain below freezing.

Despite the stretch of sub-freezing temperatures, forecasters do not expect too many chances for lowland snowfall, with mostly clear skies in the forecast until Saturday. The National Weather Service saw a slight chance for snow showers Monday evening and a smaller chance for some precipitation Wednesday night.

Parts of Snohomish, Skagit and Island counties were outliers Monday and were forecast to see up to 2 inches of snow. Much of the East Puget Sound lowlands, including Snoqualmie, North Bend and Buckley were under a winter weather advisory until early Tuesday.

Otherwise, clear and cold conditions should win out until milder and wetter weather returns next weekend. NWS Seattle will continue to share updates on the cold snap throughout the week.