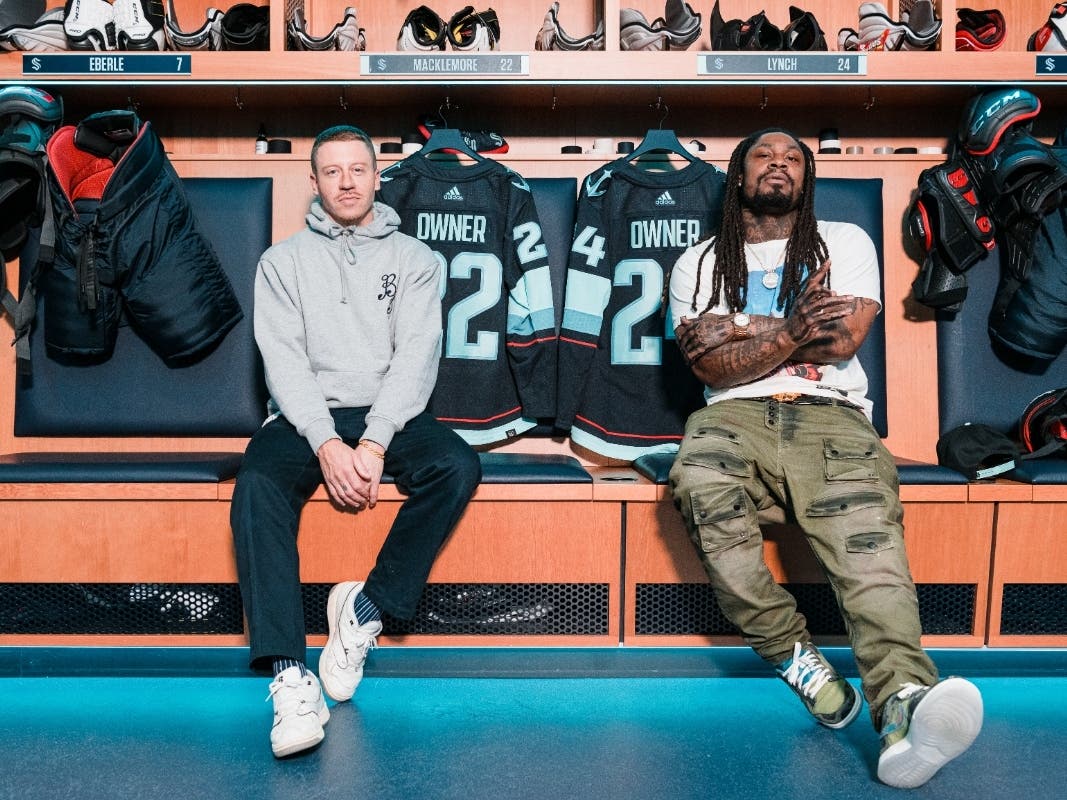 Samantha Holloway, chairperson of the Kraken’s Executive Committee, said the addition of the pair further strengthens the franchise’s investor group.

“We are now adding two hometown heroes who share our values and desires to give back to this great city and continue to make hockey a sport for everyone,” Holloway said.

The Grammy-winning rapper Macklemore, who is famous for hits like “Thrift Shop” and “Can’t Hold Us,” is a lifelong fan of Seattle teams and said he has been won over by the Kraken.

“I have so much love for our city,” Macklemore said. “The Seattle teams that we root for bring our community together and unify the people. In many ways, our franchises defined my childhood to the present. We rep our teams like no other city

“To witness the energy around the Kraken in our inaugural season blew me away. Selling out an entire first year in a brand new arena already set the tone of the legacy that is being created. I’m just grateful to be a part of history. Grateful to usher in a new generation of sports fan and memories that will be made. I was a kid sneaking into the nosebleeds who made it to the owners’ suite … and we just getting started.”

In a release, the Kraken also pointed out that Macklemore is a longtime supporter of the arts in the region, consistently using his platform to “advance racial and social justice issues.”

Macklemore is the co-founder of The Residency, a hip-hop and youth development program that has created opportunities for young aspiring artists in the area. He also is the founder of Bogey Boys, a golf and lifestyle clothing brand, which has a pop-up shop in University Village, Seattle.

According to the Kraken, Macklemore will work with the team and Climate Pledge Arena to produce music events that serve the community and engage with fans. Plus, he is expected to partner with the hockey team for an annual Bogey Boys and Seattle Kraken golf tournament.

Lynch, meanwhile, is a five-time Pro Bowler who spent six seasons with the Seahawks, including winning a Super Bowl XLVIII in 2014.

Lynch, according to the Kraken, is known for helping underprivileged youth in both Seattle and his hometown of Oakland, California, through his Fam 1st Family Foundation. He was nominated for the 2018 Walter Payton Man of the Year award.

As a Kraken investor, Lynch is expected to participate in the team’s “Hockey is for Everyone” campaign, and he will work with the team to plan events focused on young people and community activism, the Kraken said.

“On God, I’ve been a part of a lot of things, but this is something I never would have imagined —as a young hyena I always dreamed of playing on a professional team, but owning one is something special,” Lynch said.

Lynch continued: “As I look back on some of my accomplishments —I retired before I was 30 and now being an owner of a professional club at the age of 35 —I’m gonna continue to count my blessings … being a part of the Seattle Kraken is something big for me, it gives me another chance to get a ring after helping bring the first NFL one to the city. And if you thought I was goin’ somewhere, nah Seattle, I’m here! Stand up.”

Terms of the investment from Macklemore and Lynch were not disclosed.

Kraken CEO Tod Leiweke said that Macklemore and Lynch approached the team about becoming investors last summer, and that the NHL signed off on the deal earlier this month, according to ESPN.

“For us, we didn’t need additional investors, but the thing that attracted us to these guys was their interest in community activism through this organization, and that’s a big deal,” Leiweke said according to ESPN.