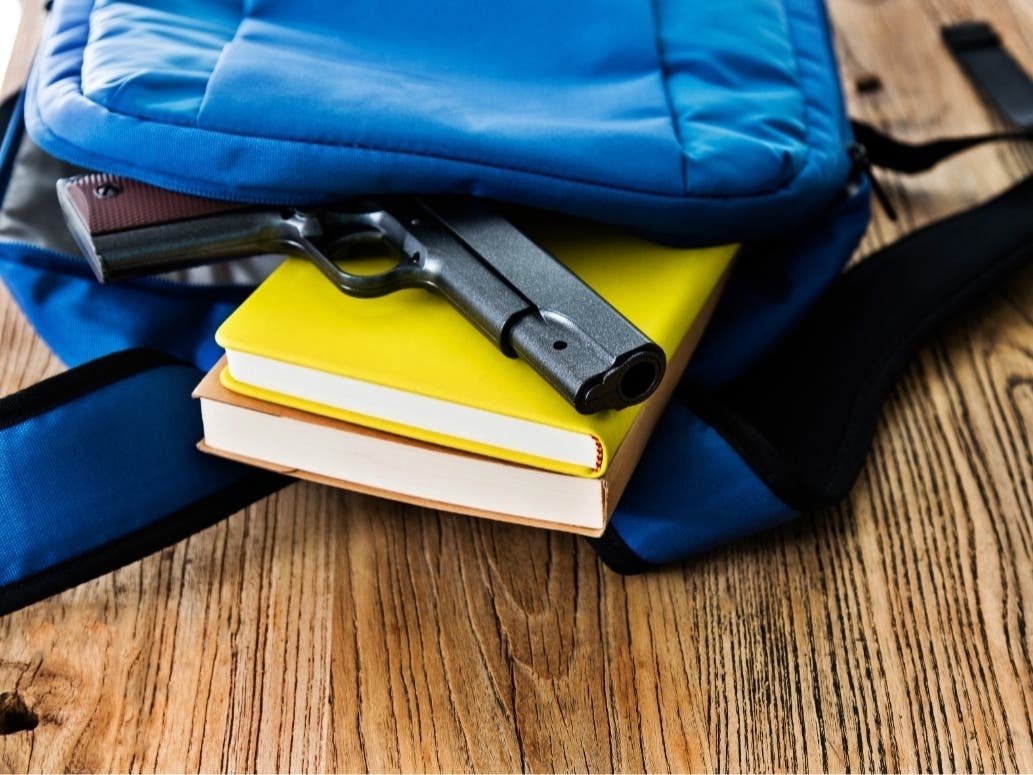 Washington has implemented several gun measures in recent years, including strengthening background checks, raising the minimum age to purchase handguns and semiautomatic rifles to 21, and mandating that gun owners store their firearms securely.

But most Washington Patch readers are against one controversial idea that some have thrown out: arming teachers. That’s according to a recent Patch survey, which received over 250 responses.
The survey was not meant to be a scientific poll but designed to give a broad idea of public sentiment in the Evergreen State.

When asked “Do you support arming teachers in school?” 77 percent of respondents said “No,” while 23 percent said “Yes.” Of the people who took Patch’s survey, about 33 percent currently have kids enrolled in school, while about 67 percent do not. Answers came in from readers in several Western Washington communities, including Bellevue, Renton, Puyallup, Mercer Island, Auburn and Gig Harbor.

Here are some of the things Patch readers told us in Washington:

Why some are against arming teachers

“Teachers are not trained to be LEOs or Military. They don’t have time on top of everything else we ask of them to keep up the necessary level of skill or training to be anywhere near effective in an active shooter salutation.”

“The job we expect teachers to do is complicated and difficult as it stands, without adding a ridiculous expectation for preserving the lives of the children in their care. There are others whose occupation is much more conducive to protecting the schools and people within, and money would be better spent preventing bad actors from entering the premises.”

“It is an asinine idea. Teachers have a hard enough job without making them become sharpshooters. Let law enforcement do their jobs and make stricter gun laws so every stupid freak in the country can’t have a gun.”

“I am a teacher and am currently not a gun owner nor am I comfortable carrying a weapon. Weapons on campuses would make them less safe, not more safe and also cause a tremendous amount of anxiety among young children.”

“Not all educators have the skills, training, or the right mindset to be carrying a gun. Students are more challenging than ever…what if they get a hold of a gun that a teacher is armed with?”

Why some are in favor of arming teachers

“I think teacher’s are on the front lines (so to speak) they alone are the one’s that should protect our children especially when our children are with them the majority of the day. They are the one’s to stop anyone from doing harm to our children. When I was raising my children, this kind of thing wasn’t heard of….It’s so different now and just like anything else we need to adapt to new idea’s and to change what we once thought would never happen.”

“Because the police are too far away with a long response time. Armed teachers may be able to stop an intruder before it gets out of hand.”

“Any public employee who desires to accept the responsibility of protecting citizens (children) who are in their care should be allowed to do so to the fullest extent of their abilities, training, and motivation.”

“Teachers with recurrent, certification, training and proper motivation would be a deterrent to future shootings. Only those teachers wishing to be armed should carry, and then only concealed to avoid giving criminals an advantage and to minimize the sad reality that we live in an unsafe world.”

“With proper training an armed staff member inside the school would stand a better chance of stopping the shooter before law enforcement can arrive (as seen in the recent Indiana Mall shooting where an armed citizen stopped the shooter). The sooner the shooter is stopped, the more lives saved.”

Other thoughts on reducing gun violence in schools

“Banning guns will not stop the violence. With the internet, they can easily find alternatives. We need to be better about re-directing this frustration and teaching kids to build rather than destroy.”

“Repeatedly the gun wielders in these attacks have been found to be troubled souls who have fallen through the cracks of society. We need to bolster our community resources in order to identify and help these individuals before they pick up a gun. We also need to make it much more difficult to get a gun on a moments notice. Even a five day waiting period could have prevented a third of these from occurring.”

“We have to stop subjecting our kids to violence. It’s in movies, music and video games. When there is a school shooting, the media is flooded with info about the shooter. All of this desensitizes kids to violence, but also teaches them that if you want to be heard, doing something like this will make your voice very loud. Guns have been around for a long time, and with much easier access and these shootings didn’t happen. We need to look inward at ourselves as a society and ask why we are churning out people that commit these awful acts of violence. It’s a people issue, not a gun issue.”

“Watch for bullies…and the bullied. This needs to extend to student’s social media. Kids can’t escape the torment when they are bullied online. If a student seems out of sorts or disengaged, we need to do a better job of engaging them and making them feel included instead of isolated. We have to be able to speak up when someone doesn’t seem ‘right’.”

Want to add to the conversation? Leave a comment below.