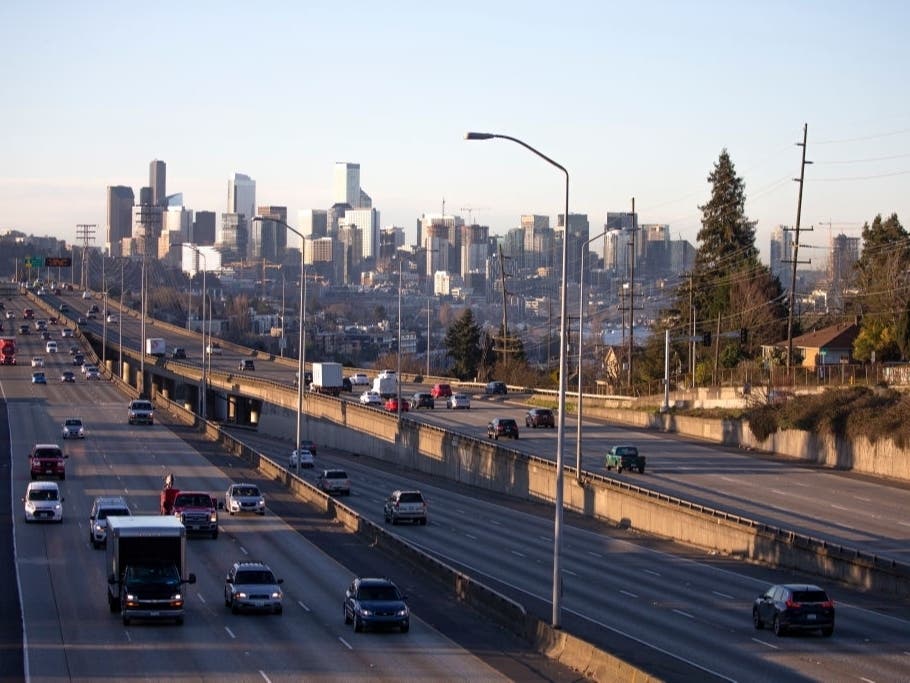 SEATTLE — Seattle commuters navigated more traffic this year than earlier in the pandemic, but the rebound in Puget Sound congestion was less pronounced than what other major metro areas experienced, according to a new report.

INRIX, a Kirkland-based traffic analytics firm, released its annual Global Traffic Scorecard on Tuesday, detailing travel trends in hundreds of cities across the globe in 2021. The report focuses on four specific measures, ranking the busiest urban areas and travel corridors in the U.S., the most congested cities in the world, and detailing how downtown travel patterns have evolved.

As lockdowns and event restrictions of 2020 eased early this year, vaccines became more widely available, and more activities resumed, more drivers hit the road for travel and work. That was true in Seattle, but less so than in cities like New York and Chicago, which ranked as the nation’s two most congested areas this year.

Some cities saw 2021 traffic surpass pre-pandemic levels, like in Las Vegas, where congestion soared 76 percent higher in 2021 than in 2019, INRIX found.

By contrast, INRIX found Seattle-area congestion was still 59 percent lower than in 2019, while trips to downtown were about 36 percent lower than before the pandemic. Seattle still ranks in the top 25 most congested U.S. cities, but in 2021 fell to 21st place, down from 15th in 2020.

Telecommuting could be playing an outsized role in keeping Seattle’s traffic lighter than elsewhere, with many of the region’s largest tech employers choosing to extend remote work options into 2022, INRIX told The Seattle Times.

Still, INRIX estimates the average Seattle driver lost 30 hours sitting in traffic this year, slightly lower than the national average of 36 hours but well below the 74-hour estimate logged in 2019.

Puget Sound still landed two spots on the top 25 worst corridors in the United States: Southbound Interstate 5, from State Route 161 to Pacific Avenue in Tacoma, claimed the 12th spot, while northbound Interstate 5, between Northgate Way and 128th Street in Seattle, ranked as the nation’s 19th slowest, according to INRIX.

Here are the nation’s top 10 most congested urban areas & travel corridors from INRIX: