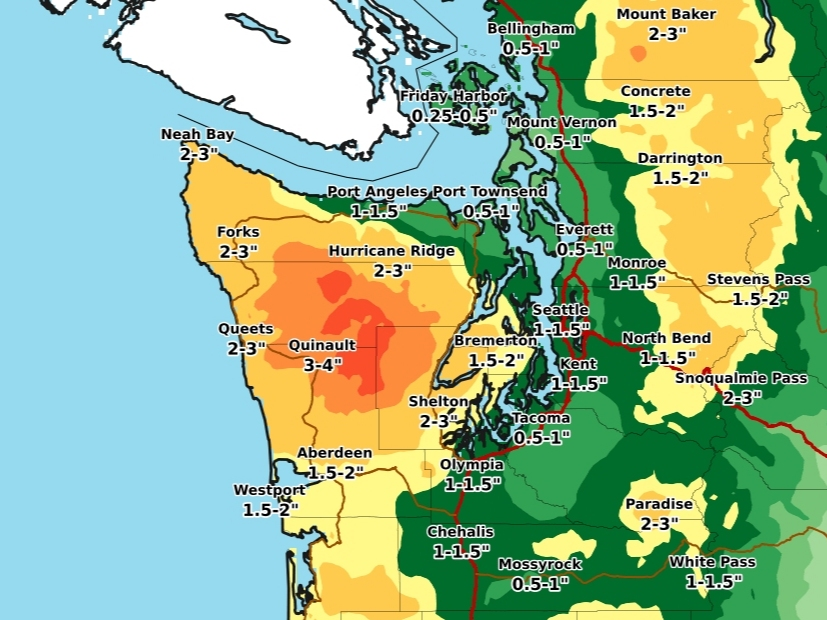 SEATTLE — After a string of cold and sunny days, Western Washington is headed for a warmer wet streak to send off February. Forecasters expect a series of frontal systems approaching Puget Sound will bring several days of rain to the region closing the books on an unusually dry mid-winter stretch.

Earlier this month, the Seattle Weather Blog noted Seattle received less than an inch of rain between mid-January and mid-February, making for the second-driest such period since 1945. The approaching storms could bring Seattle twice as much rain as it’s seen in February so far — in as little as 48 hours.

“For perspective, in the first 25 days of the month, Seattle-Tacoma International Airport has only received 0.74 inches of rain, but the rainfall that is likely between Saturday [and] Monday will bring upwards of 1 – 1.5 inches to the area,” NWS Seattle wrote Friday.

Forecasters expect at least the first half of Saturday will stay dry as clouds filter into the area, with widespread rain on track to begin in the lowlands by evening. While the airmass will be warmer, the Cascades are likely to pick up at least a little new snow at elevations between 2,500 and 4,500 feet.

Widespread rain will continue on through most of Sunday, along with some gusty winds, with a chance for a brief break in the action late in the afternoon. However, forecasters see yet another system moving in Monday with wet weather expected to persist for the first few days of March.

“Another round of widespread lowland rain and gusty winds are expected area wide,” wrote Maddie Kristell, a meteorologist at NWS Seattle. “Models are now not so certain that there will be much of a reprieve on Tuesday as showers could linger for most of the day. That ‘break’ so to speak, could occur Wednesday morning, but indications at this point is that additional systems will filter in through Thursday.”

On the temperature front, Friday’s overnight lows should be the last to dip below freezing for a while. Afternoon temperatures will rebound toward the 50s by Monday, with lows improving into the mid-40s