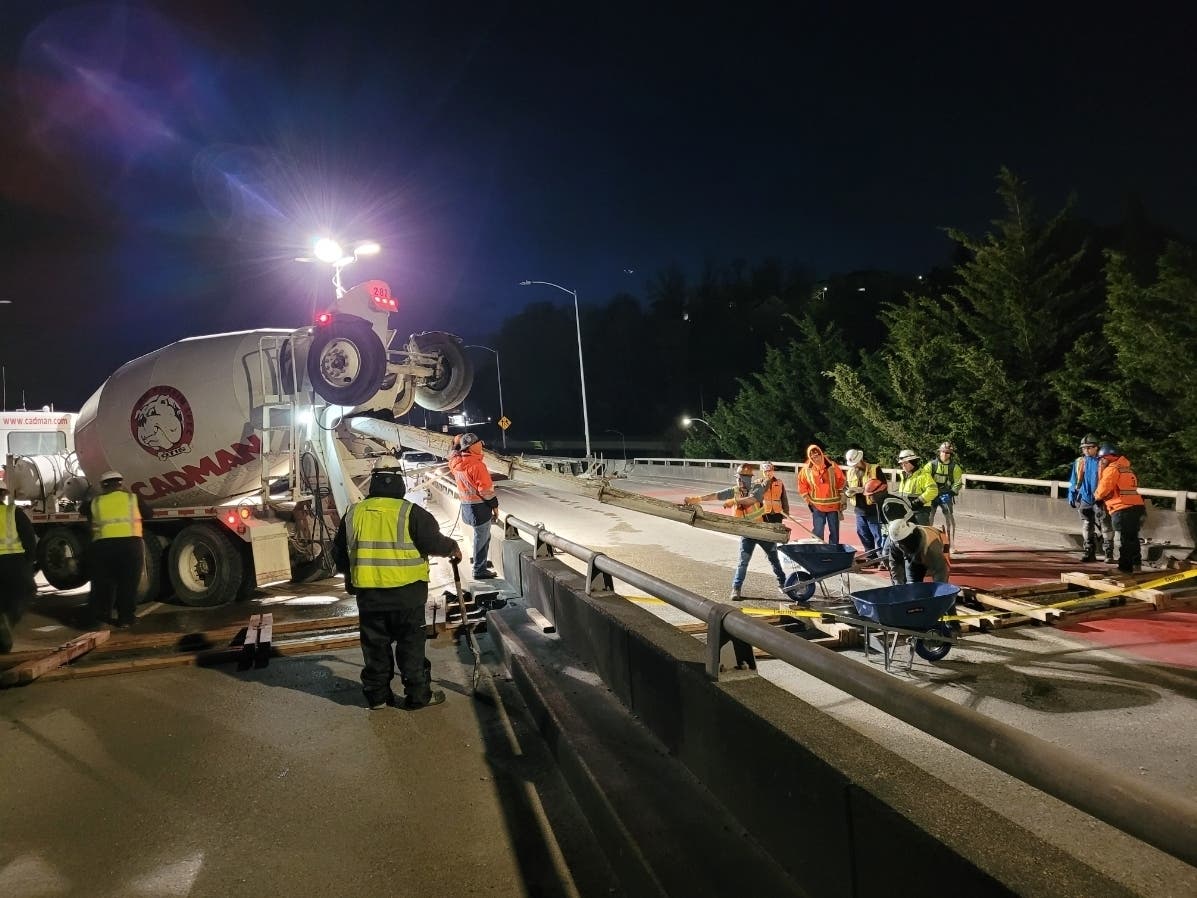 SEATTLE — Essential work toward completing the West Seattle Bridge repairs resumed Tuesday morning with the arrival of concrete as a prolonged labor dispute continues with no end in sight. More than 300 concrete workers have been on strike over better working conditions and a fair contract since late last year.

Despite repeated calls from the union and public officials for the concrete companies to return negotiating table and hammer out a deal, talks have remained virtually deadlocked for months. In February, King County attempted to spur a deal by opening a multimillion-dollar bidding process to concrete suppliers, contingent on a labor deal and stipulations preventing further stoppages. Last month, King County Executive Dow Constantine unveiled a proposal to stand up a public concrete production pipeline to guard against similar headaches in the future.

The prolonged stoppage has delayed a slate of major projects around Seattle and King County, including the West Seattle Bridge repairs, the Washington State Convention Center expansion and State Route 520 restoration work.

In March, Teamsters Local 174 workers offered to return to work on certain projects as an “act of good faith,” and Tuesday morning returned to work at the West Seattle Bridge. One of Seattle’s busiest roadways, the high-rise portion of the bridge has been closed to drivers since March 2020 after routine inspections found rapidly growing cracks along the structure’s underside.

“We are now just 245 cubic yards, just 30 truckloads, of specialized concrete from reconnecting Seattle,” said Councilmember Lisa Herbold, whose district includes West Seattle. “My top priority remains ensuring this critical lifeline, not just for West Seattle residents and businesses, but our entire region is completed as soon as possible. Today, the finish line is in sight. I’m incredibly thankful to Teamsters Local 174 concrete mixer drivers who have returned on a limited basis to serve our community and ensure this critical project gets back on track.”

Seattle Mayor Bruce Harrell also welcomed the deliveries in a lengthy statement Tuesday and said an adjusted timeline for the bridge’s reopening would be determined after the concrete pours were completed. Before the delay, the bridge was expected to reopen in July.

“I want to again thank the Teamsters for taking the extraordinary, good-faith action of returning to work with three concrete companies,” Harrell said Tuesday. “Despite those companies having no existing agreement with our contractor to work on the bridge, my administration immediately engaged to identify which business could meet our specific needs and worked relentlessly to help facilitate concrete delivery.”